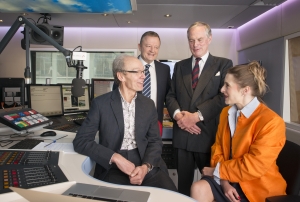 The Great War Symphony was launched at the Classic FM studios today.  As Official Composer for Remember WWI, Patrick is writing the new work with four movements to depict each year of the First World War.  The work will be heard in its entirety in 2018 at a major London venue.  Before that some of the main themes from each movement will be released and heard first on Classic FM.

As part the launch team, Patrick was delighted to be joined by Classic FM presenter John Brunning, as well as Lord Astor and Lady French who are both descendants of First World War commanders (grandson of Field Marshall Haig and great-grand-daughter of Field Marshall French, respectively).

Patrick says “I am thrilled to have been given this honour of marking the centenary through my music and The Great War Symphony ­will be a groundbreaking four-movement work depicting each year of the war.  We’re very fortunate to have the backing of Audio Network, one of the largest Production Music companies in the world, who are recording the eight main themes to be released to the public over the next few years ahead of the premiere of the full work in 2018.  And we want people around the country to get involved with performances of these parts of the movements to help the music reach as many people as possible.”   These main themes from each of the movements will be heard first on Classic FM and then available to download along with the sheet music for people to start performing.

Thanks to the generosity of our recording partner, Audio Network, a taster track of The Great War Symphony will be released on Classic FM at the end of May as a FREE DOWNLOAD, along with the FREE SHEET MUSIC for people to start performing.