The premiere of Patrick’s new work The Innocents – commissioned by Proms at St Jude’s – was due to be premiered this weekend by the world-renowned Voces8 alongside Finchley Children’s Music Group and organist Roger Sayer.   This has obviously had to be postponed until next summer but the Proms team have created ‘Proms At Home’, a series of special events to keep the festival spirit alive!

As part of that, they’ve produced a great documentary revealing the inspiration behind The Innocents including interviews with Patrick, the librettist Andrew Hawes, Paul Smith from Voces8 and Benares expert Alan Walker.  It also includes music from Voces8 and soprano Grace Davidson.

The Innocents has been written to mark the 80th Anniversary of the sinking of the SS City of Benares during WW2 – the ship was carrying 90 children away from wartime London to safety in Canada, but nearly all the children perished after the ship was torpedoed, along with many of their escorts.  The words by Patrick’s librettist brother Andrew and the music are based around the events of that night, but also convey the wider suffering of children in war. 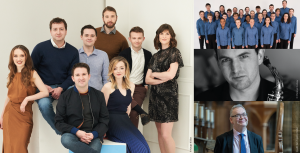