“A grand oratorio for massed voices and orchestra, which mourns the dead, salutes their sacrifice, and summons a vision of rural England that inspired so much of the art and music of that time.”
Ivan Hewitt, The Daily Telegraph

The Great War Symphony is a poignant and moving work for choirs, soloists and orchestra written to commemorate the centenary of the First World War.  It mourns the dead, salutes their sacrifice and evokes a vision of England and her allies that inspired so much of the art and music of that time.

The Symphony is in four movements and each one reflects a year of the war – Praeludium (1914-1915), March (1915-1916), Elegy (1916-1917) and Finale (1917-1918).  The music is set to the affecting words of war from poems, diaries and epitaphs including Wilfred Owen’s 1914, Seigfried Sassoon’s Hell Let Loose, Margaret Postgate Cole’s The Falling Leaves, as well as lesser known words from Sydney Bolitho’s Gallipoli and Moina Michael’s We Shall Keep The Faith (the first reference to the symbolism of the poppy).

On its release, the recording went straight in at Number One in the Classical Charts and received its World Premiere in London’s Royal Albert Hall on 9th October 2018 in partnership with Classic FM as part of the national commemorations to mark the end of the centenary.  The concert brought together the Royal Philharmonic Orchestra, National Youth Choir of Great Britain, London Youth Choir, Berkshire Youth Choir, Invictus Games Choir, soloists Louise Alder and Joshua Ellicott as well as the superb Military Bands – The Band of the Household Cavalry, Fanfare Team of the RAF and The Corps of Drums of the Royal Marines plus choirs ‘beamed in’ from around the country.

The work has since gone on to receive numerous other performances including at New York’s Carnegie Hall.

Through radio broadcast to millions, the event helped promote the critically important work of SSAFA, the oldest tri-service charity focussed on supporting Armed Services families.  The charity also continues to receive a share in royalties from sales of the album and sheet music. 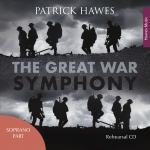 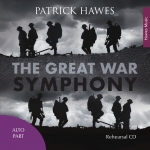 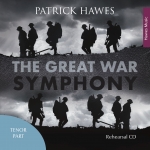 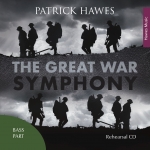 Sheet music for selected excerpts from the Symphony is also available, including: